Trip To Evostar 2017 In Amsterdam : when there was evolution, fun and city explorations.

This week I had the great opportunity to travel to Amsterdam! It was for my first international conference, EvoStar. I returned yesterday evening and today I was on a train to York. But that’s another story for another post. I’ll split this one in two parts: the conference and the Amsterdam adventures. 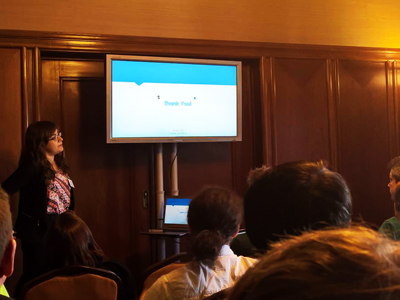 Conference first, as it should come. I arrived late, barely in time for my own presentation. So here’s a tip: fly in the day before the conference, especially if there’s a chance your presentation will be scheduled in the first session on that first day. I had troubles in the morning, it was a fairly rocky start, but eventually I found the venue and the room where I was to pretend I’m smart and show off my work. I had to wait a while to not interrupt the presentation that was happening at the time (with one to go before mine). In that time when I was outside the room, nervously chasing my tail, a bunch of other people started gathering. Probably for the presentation before mine on MsPacman and StarCraft balancing, or maybe even mine! Needless to say, I got even more nervous and wondered how many people did a double check after reading my name tag and the list of presentations on the door. Then my supervisor showed up and nerves really cracked up.

But it actually went great! A room of over 40 seats overflowing with people. My throat was terribly dry and words got stuck in there, but I got through it, made eye contact with the audience and some of them even nodded along or chuckled at random jokes I threw in there. The session chair was great, he laughed at every one of the jokes! The questions weren’t too bad either, nothing to put me on the spot and tell me I’m talking crap. So I think I did alright. 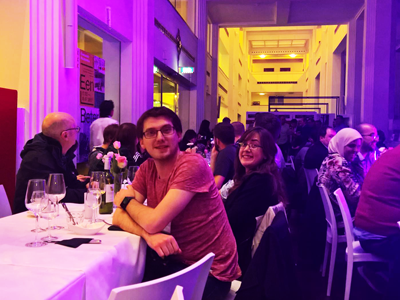 And that was it! First session, first day, and I was free to enjoy the rest of the conference without worrying about screwing up in my talk. There was lunch, which I devoured for the sake of my empty stomach. There was an attempt to understand the following session and not let my sleep deprived brain lose track of information. And then I ran off to check in at the hotel and drop my luggage off. The poster session was interesting when I returned. I met one of the IGGI cohort due to start the next year, Ivan Bravi, and I was happy that the rest of the IGGIs would stop bullying me for publishing in my first year, when this guy already has 3 publications and hasn’t even started the PhD! I also had a chat with another fellow IGGI student from the Essex University, Mihail Morosan, a very nice guy who was in the running for the EvoApps best paper award. Most of the posters contained way too many words that made no sense to me, but there was one cool project by Nuno Lorenzo who evolved shoes! Very expensive shoes, but a very fun project. There wasn’t much food at the reception, which was highlighted by the excited synchronous “MEATBALLS” squeak, as a lady with a food tray rounded a corner, produced by me and Ivan. They did serve good meatballs. And wine, the wine was good too.

The following day I went to the first two morning sessions. The first one was for the EuroGP best papers. Most of the presentations were good, making some sense of very confusing terminology and equations. But the paper I was there for was one on tangled graph representations for Atari game playing agents (here). It was actually a very good paper, some interesting things done there that I would like to have a better look at, as it could help my own research. And they did actually win the award, well done! This, compared to another GP screen capture work in GVGAI, where the guy didn’t even know much about the framework and a lot of things he did seemed fishy (here). 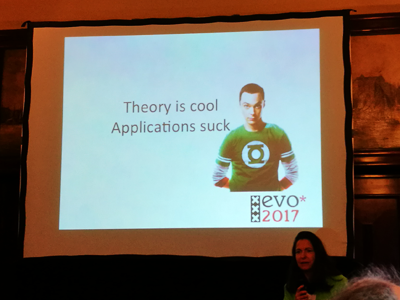 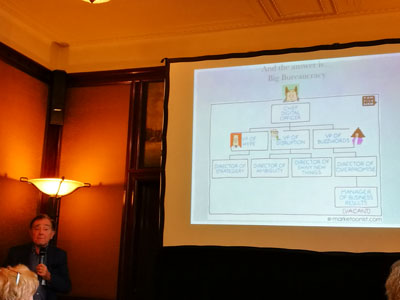 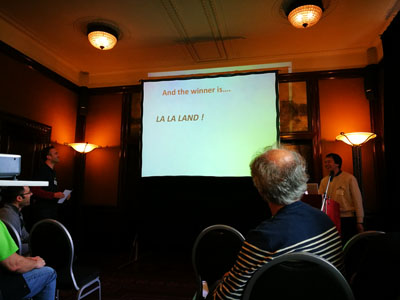 There was the conference dinner on the second day as well. Soup was served in a glass, which split the conference crowd in half, worse than the dress debate: there were some that drank it and some that used a spoon - I went for the drinking it directly option, it was so much easier. The rest of the food was good, but I was already quite full after the lunch I’d had out in the city, so I did not have much of it. I did have two glasses of wine, which resulted in a tipsy me. Oops. Apple pie for dessert, yum! Then the whole thing ended in song, like any good musical.

On the last day I decided to skip the morning session, as nothing looked inviting enough and I needed the extra sleep, but the keynote was great - on the links between academia and industry and how we suck at it. The closing ceremony awarded all the best paper prizes (which Mihail unfortunately didn’t win, but a nomination is fantastic in itself!) and the details of the next conference were announced. EvoStar 2018 will apparently take place in Parma, Italy! Maybe I’ll visit Parma next year then, I had a great time at the conference and met a few interesting people. Though most of them I do not remember the names of, so I cannot give them proper mentions.

Now for the fun part. In the first day I realized my hotel was not in a good location. And by that I mean it was right on the edge of the Red Light District. And that came with shocking shops surrounding the hotel, suffocating smells and catcalling. Next time I should definitely make a more informed decision! But the rest of Amsterdam was lovely. I did not explore much on that first day, although I did stop a few times for pictures (of which I ended up with over 400!). In the evening, we rounded up a nice little group to go out to dinner with, at an Argentinian tapas place close to the conference venue. It wasn’t authentic and good enough, as judged by the Spaniard among us, but I still enjoyed my steak - which, yes, I did have well done, and I am not a monster! 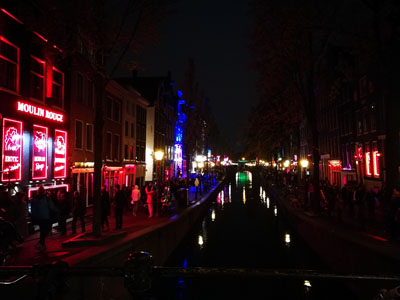 On the second day we had more time for exploring, about 5 hours spent around the city. Started south at the Rijksmuseum, where so many people were on top of the famous “I amsterdam” sign that you could barely see the letters. Even more south with Vondelpark, where a bunch of dogs excitedly raced for balls in the water; only one of them would actually cross the water to get the ball, while the others barked from the dry lands; there was one fun time in which the retrieval dog did a breadth-first search for the ball and ran around in lines around the spot the ball was until he finally found it - he would’ve benefited from the conference, there are much smarter ways of doing that! Then up to the Westerkerk tower, around which there was at least a 2 hour wait for the Anne Frank house. And up to a pancake place which will be remembered for many reasons; the pancakes there are amazing though, I had a bacon and apple one, with a delicious caramel sauce! 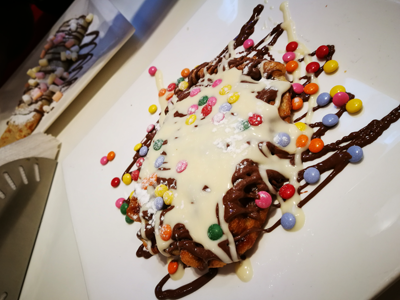 On the third day, after the conference closed, we made our way up near the Centraal station to find the starting point for the canal tour sponsored by the conference. That was quite a cool experience, even though we queued wrongly with a huge group. Eventually we did make it to the right boat and off we went, getting some nice views of the city from a different angle. We ran off to explore some hidden corners in the west part afterwards, finding some beautiful secret gardens and a cute little woodwork shop. Dinner was Italian with some pizza, followed by a traumatizing walk around the Red District - must be done, if even just once. One guy was spotted asking one of the ladies in the windows how much he was supposed to pay - and what for. Protect your innocence, young one.

The last day we spent exploring some more before the flights. Starting at the Begijnhof, then going up to the botanical garden and NEMO for a nice view of the city on the roof of the science museum. Some little streets were found and we stopped for dessert in a small shop called Sweetella, which lived up to its name. I had a waffle topped up with Nutella, white chocolate and smarties and I think part of me died there. A hunt for water was necessary, followed by the sad fareweel to Amsterdam.

And in the four days spent there, I surprisingly did not get run over by one bicycle.

Check this album for more pictures.

One thing I noticed, I complain a lot about having to travel too much, as now I am off on another adventure. But how lucky am I to be able to go to beautiful places!